Excerpt from The Alexanders - The First Decade.

As many of you know, my work in progress involves Dominic Alexander and begins in Scotland in 1911. Due to unfortunate circumstances Dominic has had to move in with his Uncle Duff and is a stranger in his new surroundings.

The following excerpt is taken from 1912 and tells how he becomes friends with a poor Russian boy who is also friendless. 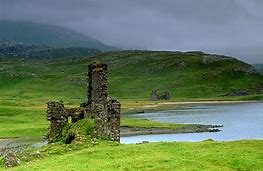 Being in the cooler northern region of Great Britain, Scotland is one of the windiest countries in the world with higher than normal amounts of rainfall. Winter usually brings copious amounts of snow in the Highlands with lesser accumulation in the lower regions. The days are much shorter. This twenty-third of February, a Thursday and the last day of Dominic’s work week is clear, a cool breeze chills from the southeast as he walks along Langlands Road. Bluish shadows from a gibbous moon accompanies him home. Pulling his parka tighter about his face, he hurries his step knowing Uncle likes to eat at six o’clock and he guesses it must be a half hour later than that. He’s usually home by then now that the days are not as long but he and Tubs had to finish replacing the door in Danny Meek’s bungalow in Ibrox.
He’s tired, his shoulders are slouched. One gloved hand carries his still stiff tool belt. A well-used hammer Tubs gave him hangs from one of the side loops and bumps against his leg. The repetitive slap in the only noise except for the distant clanging of the Fairfield Shipyards which go all night. The other holds the front of his coat tight at the neck. A well-used canvas lunch bag is slung over one shoulder. He was up at 6 this morning and helping Duff in his shop. The security men that pick up the repairs come every Thursday at noon delivering the jewellery to be fixed and pick up the completed jobs. Dominic spent the morning polishing chains that Duff had repaired. There was a silver one he really liked and hoped to own one day. While thinking of how much he needs to put aside when he turns onto Drive Road that will take him by Elder Park, he encounters three boys roughly his age. 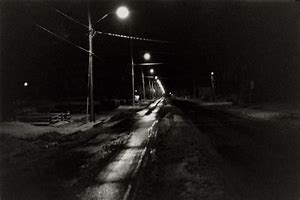 Two of them are pushing and shoving a smaller boy that is doing his best to hold his own pushing and shoving when he can. The larger of the aggressors gets in close enough to grab the smaller one by his jacket collar and shove him against the wrought iron fence that surrounds the park. His companion steps closer and hits the smaller boy in the stomach. When the injured youngster falls to the ground Dominic is close enough to hear them. They don’t know he is near. Not liking what he sees, the fallen boy much smaller, he sets his tool belt down gently and creeps closer.
“We told you before Pestov, you stay in the Gorbals. You Russian scum need to stay in the tenements where you belong. We don’t want you ‘Pests” around…”
Tall boy is interrupted by a blow to his left ear that causes him to stagger and cartwheel his arms before careening into his helper knocking them both down, the bigger one on top. Dominic steps up to them, his gloved fists in the fighter’s pose his father taught him, taught all his boys. His left foot back for balance, both feet on their toes.
“Try someone your own size ya bullies.”
Dominic is a scary figure, only his silhouette is visible to the downed ruffians, the partial moon shines over his left shoulder exposing his upraised defensive fists. The downed boy is surprised by the aggressive act of the stranger and sits up trying to catch his breath and watch. The two on the roadway are scrambling backwards. The bolder one shouts while rubbing his ear.
“What’s it to you…and ya shouldn’t sneak up on people.”
They’re standing now and maybe street tough but they’re leery of this stranger who is not an adult. They strike their own poses, the shorter one a step behind and bobbing his head back and forth from Dominic and his companion not sure what to do.
“Ya shouldn’t be picking on people smaller than you and you’re obviously not brave enough to do it on your own, takes two of yas.”
Dominic starts to bob lightly like a trained boxer.
“Step up now you cowards and let’s finish this…or bugger off!”
Tall boy and Uncertain give each other a glance before deciding that buggering off is probably the best option, turn and scamper away behind one of the apartment buildings on the other side of the street. Dominic relaxes and turns to face a bedraggled figure sitting with legs flat, holding his stomach and taking short breaths. The head is uncapped and hanging down. Even in the low light, Dominic can see the jacket is light and tattered. Gathering his tool belt he wonders at the boy’s silence.
“Ya could at least say thank you.”
The voice is deep for someone so young and heavily accented from a foreign language.
“I didn’t need any help.”
“That’s not what I saw.”
No response. He reaches down with his free hand.
“C’mon, I’ll give you a hand up.”
Hesitant at first, the younger fellow offers an uncovered hand, small and delicate like a girl’s. Dominic is startled by the uncovered limb. Grasping the hand, Dominic helps him to stand.
“Don’t you have any mitts?”
Tucking his hands in his jacket side pockets belies the next statement.
“No, I don’t, but I don’t need any.”
Stepping back Dominic tries to see his face but the low light only casts shadows. He can see that it is wide, lots of stray hair. The chin is up. He stands at least five or six inches taller.
“So, what was that all about? And do you really live in Gorbals?”
“They just think that all Russians are like the Ivanov gang and all we want to do is steal everything. And yes I do live in the Gorbals and I do live in a tenement before you ask.” 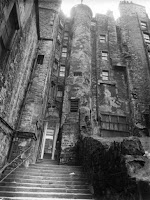 Dominic heard about the squalid buildings that housed immigrants in crowded quarters, often four to five in one or two rooms, lured by work in the yards. Always a shortage of homes drove the rents upward. Sanitation is a problem. Many do not eat properly. He didn’t believe it at first. He knew his family was poor but they always had a roof that didn’t leak, clean beds and food.
“What are you doing here? And at night?”
“I…I just need to get away from all that noise and dirty smells and…”
Dominic senses discouragement in the voice, a lower tone. The pitch changes, bolder.
“It’s not your business. I should be going, my brothers will be home later and I need to be there.”
Without any further comment, he sets off towards the other side of the park. Dominic can see the figure shaking from the cold and stares at his gloves. He has an older pair at home, not as new but just as warm. Removing his gloves, he chases after the boy.
“Here, take these.”
Surprised by the command, the boy stops and faces Dominic, seeing the gloves in the outstretched hand. He is affected by the offer.
“You’d give me your gloves?”
“Well it’s two or three miles to Gorbals and I have another pair.”
He can’t say no. He can hardly grasp the gloves properly from chilled fingers. He stares at Dominic while twisting them on.
“Why are you doing this? You don’t know me.”
“Not so long ago I didn’t always have mitts either and I know what it is like. Now I’m working and can buy my own.”
There’s a moment of silence. Dominic puts his own hands in his coat pocket.
“What’s your name?”
“Ivan.”
It comes out in Russian, eeVAHN. Not I-van like Scots call him.
“Ivan Pestov and what’s yours?”
“Dominic Alexander, but most people call me Dom. You can if you like.”
“Why would I like, I’ll probably never see you again. I doubt you hang around the Gorbals and I’m not welcome here.”
“Sure ya are, ya can come home and have a bite with me and Uncle if ya like?”
Dominic is worried about his spontaneous suggestion not sure how Duff will react to an uninvited guest but he needn’t be. Surprised by the stranger’s generosity, Ivan waves him off and starts towards the Gorbals.
“Thanks for the gloves and for getting those jerks off my back.”
Watching until the retreating figure is in darkness, Dominic hitches his lunch bag straighter on his shoulder and heads home wondering what the surprise is that Duff said would be there.

Thanks you for visiting today. I'm excited that my novel is nearing completion, I've been working on it since January, 2016 and I expect to be finished by the end of this year. Then comes the revisions, beta reading, editing, cover design and finally - a book. More info to follow as the journey of The Alexanders - The First Decade comes to and end - and a beginning!

Watch the coming weeks for new guests on the Scribbler.

Posted by Allan Hudson at 07:43
Email ThisBlogThis!Share to TwitterShare to FacebookShare to Pinterest