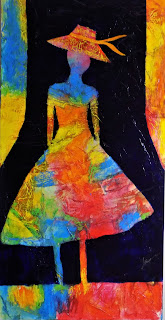 I recently attended a friendly gathering of artists and authors at a friend’s house. I didn’t know most people there but was welcomed warmly by these happy strangers. A lady with a pleasant smile introduced herself. Later we talked and I discovered she is an artist of considerable talent. I’ve been able to see some of her work and am impressed with her use of colors and the warm images they portray. 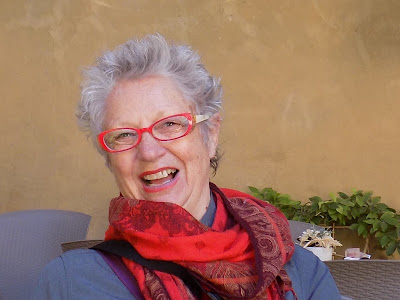 Susan has agreed to a 4Q Interview.


Susan Jardine was born in England moving with her mother to Parrsboro NS in July of 1946 to join her father who after the war entered the banking profession. Susan grew up moving almost yearly to live in towns in the Maritimes. She is a graduate of Mount Allison University. Susan lived, worked and raised her son in Moncton, NB. After spending several months in New Zealand in the early nineties, Susan moved to Vancouver. Susan lived in Ceret, France for 6 months before moving to Shediac. She enjoys long distance walking such as the Camino Santiago across Spain, the Chemin St Jacques across France, and the Via Francigenia in Italy. As well as her passion for art and travel, she is an avid gardener. Susan conducts Creative Art workshops in her home studio, as well as with the Moncton Art Society, the Sackville Art Association and with Tantramar Seniors College. She has facilitated Healthy Eating, and Healthy Cooking courses with Tantramar Seniors College.

4Q: Have you always painted Susan or was this something you discovered later? 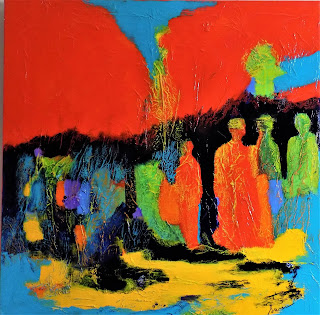 SJ: I started painting in watercolours in 2002 during a stint as a Regional Representative for the Public Service Alliance of Canada. I attended an acrylic painting workshop at the West End Community Centre in Vancouver in 2006. I attended workshops after that with Brian Simons in Victoria and several in Vancouver during the next few years. I walked across France and lived in SW France for 6 months in 2009-10 after having ceased working for an institution. I took lessons every week while in Ceret, France from Pierre Grau and painted with his group. Upon my move to Shediac after my return to Canada in 2010, I took a job in a call centre to augment my income in order to pursue my passion for travel. When I was laid off from that, a dear friend suggested that I could sell my paintings to augment my income. I started that and was heartened by the fact that I won an honourable mention in my first foray into art shows, followed by a VIP award in my second group show. Since late in 2010 I have focused on my art practice and have had a few solo shows as well as participated in a number of group shows in the Maritimes. I attended the Shediac Market for 8 seasons with my art, the Artsts’ Alley in Shediac Friday nights during the summer, and have been at the Avondale Art and Garlic fairs several years. I participated in a show of 6 Canadian painters in Burgau, Portugal. I once flew to the UK to take a 2 day workshop with Soraya French. I have done a one month artist’s residency in Provence and spent a month painting and exploring art in Florence…combining my 2 passions of art and travel. I have been encouraged by the reception I have received with my art. 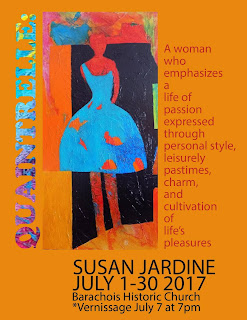 I have pieces in art collections all across Canada, in California, the Carolinas, Scotland, Shanghai, Sweden. I try to do something for my art practice daily whether it is painting, viewing works of other painters, teaching myself new techniques, giving workshops, etc. Recently I have been exploring abstract portraiture, altered books, cold wax and oil painting, and painting on Yupo paper.

4Q: What inspires your work?


SJ: I recently wrote this as an Artist’s Statement along with a quote that I feel helps understand my approach
“The creation of something new is not accomplished by the intellect but by the play instinct acting from inner necessity.
The creative mind plays with the objects it loves.” -Carl Jung


Life should be colourful, expressive and full of texture.

When I am painting, I feel full of joy and wonder that the colours and textures are coming from what I place on the canvas. I am in a state of joy and can only hope that the viewers of my art feel some of that joy. 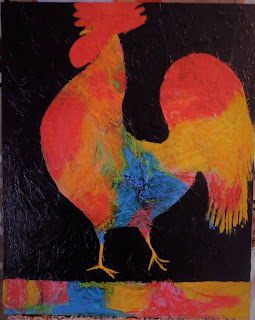 I am also a great believer in the theory that the artist ought to get out of the way of the painting and let it reveal itself. I do not start my paintings with any preconceived notion of what it might reveal. I love to use inks, and collage in a very random way to create the imprimatura. I then spend a great of deal of time looking at the results from every angle to determine the next step. Very often the painting will reveal itself as a part of things and events that have been on my mind. Recently my works have been centered around the problem of the millions of women who have “disappeared” from many countries. This has resulted in a series called “Quaintrelle”.

As I sit surrounded by the art I have created, I sneak looks at the pieces and make up stories about them that make me smile. I hope that the viewers of my art have the same reaction.

SJ: I attended a three room school house in the small fishing village of Murray River, PEI for three and a half years. I clearly remember being chastised by the teacher, may have been Hazel McPhee, about my not colouring in the lines. I have a memory of being mocked for my rendition of an easter bunny made with pussy willows. I remember too that Mrs. McPhee started what she called a secret service. The note that was handed to me furtively suggested that I report on how many of my classmates spoke with a new student in the school. I was not happy to do this as I felt spying on my fellow students was not the right thing to do, so I did not. 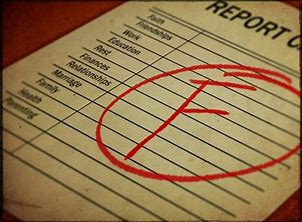 I got an “F” on my report card for cooperation or whatever they categorized it then. All the rest of my report card was A’s and B’s. When our family was transferred to Campbellton NB during the year, Mrs. McPhee had revised my report card to read “B’ in that category for my new school. All that to say, I don’t necessarily like to live within “the lines”. I often tell my workshop participants that there are no rules, except those that encourage civility, in my creative art workshops.


4Q: I noticed from the postcard you gave me that you do workshops. Tell us about them and when they take place. 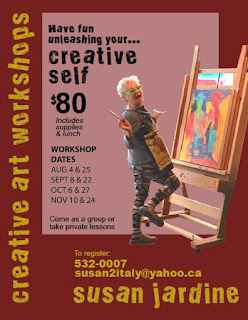 SJ: I do conduct Creative Art Workshops in my home studio and have done so for 7 or 8 years now ever since someone asked if I did them. When I worked for an institution I loved the part of my job where I facilitated adult learning so giving art workshops allows me to follow another passion of mine. I love to come with new ideas to help people express them creatively. My workshops in my home studio are usually run twice a month. I supply all materials, and a lunch. I can comfortably accommodate 5 people for 6 hours of fun and creativity for $80.00.
I can also go off site and do workshops for up to 15 people. 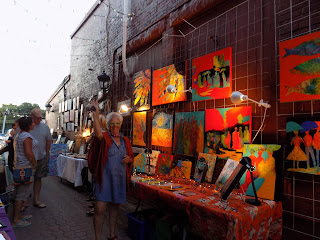 Thank you, Susan for being our guest this week.

A special thanks to all you that visit the Scribbler. Please let us know what you think by leaving a comment below! 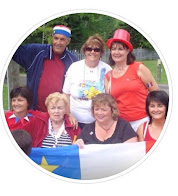