It's a real pleasure to have John back on the Scribbler. On his first visit, he participated in a 4Q Interview. If you missed it, please go HERE.

This week he talks about his latest thriller 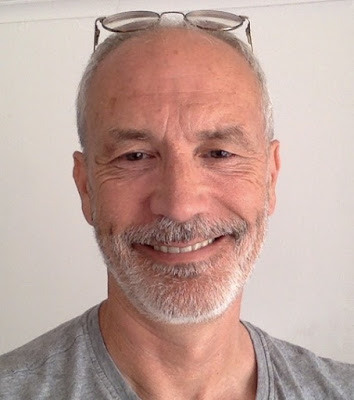 I’m delighted to be back in The Scribbler three years after my first appearance. 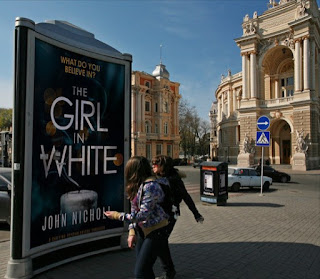 The Girl In White, my eighth darkly psychological thriller, was published by leading independent publisher of crime and thriller fiction, Bloodhound Books on the 4 September. Like all my books it draws heavily on my work as a police officer and child protection social worker.

Harry Gilmore has no idea of the terrible danger he faces when he meets a beautiful girl in a local student bar. Drugged and abducted, Harry wakes up in a secure wooden compound deep in the Welsh countryside, where he is groomed by the leaders of a manipulative cult, run by the self-proclaimed new messiah, known as The Master.
When the true nature of the cult becomes apparent, Harry looks for any opportunity to escape. But as time passes he questions if the master’s extreme behaviour and teachings are the one true religion.

With Harry’s life hanging by a thread, a team of officers, led by Detective Inspector Laura Kesey, investigate his disappearance. But will they find him before it’s too late? 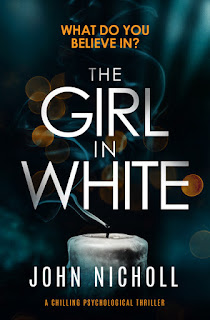 The two young women and their older male companion sat in an old, rust-pocked Transit van dressed entirely in white, scanning the street with keen eyes, as they had for almost two hours.

Achara, a dark-haired, strikingly attractive young woman, peered to her right. ‘What about him?’

The big man swivelled in the driver’s seat, tugging at an unkempt brown beard tinged with grey as he pressed his face against the glass.

Achara pointed with a purple-painted fingernail that perfectly
complimented her slender hand. ‘Him, him, the guy in the faded
jeans and black top. He’s been crying. Look at the state of his eyes.
That’s got to be a good sign, easy-peasy. He’s young, he looks reasonably fit. He’d make an ideal manual worker. We couldn’t find a better target.’

The big man lifted his military binoculars to his eyes and focussed
on Harry’s face. ‘It could be hay fever. It’s the time of year for it.
You’re making assumptions based on dubious evidence. Maybe he
hasn’t been crying at all.’

Achara made a face, frustrated by the big man’s lack of trust in
her ability. ‘Look at his hunched shoulders, the morose expression on his face. He’s perfect, absolutely perfect. Just give me a chance. That’s all I’m asking. Let me prove myself. Surely I’ve earned that much after all this time.’

The man lowered the binoculars, sighing as he rested them on his
lap. ‘I don’t know. I’m not so sure.’

Achara kept her eyes on Harry as she responded, her initial frustration fast becoming agitation that threatened to boil to the surface.

‘I’m here to serve the master, but how can I do that if you never give me the chance to prove myself worthy. It’s been months since I completed the training. I’m ready and waiting. If not now, when?’
The big man took a deep intake of breath and exhaled slowly,
weighing up his options as the second young woman spoke for the
first time in over an hour. ‘Oh, come on, Baptist, Achara knows what she’s doing. She’s completed the course. She passed with flying colours, a natural. One of the best we’ve ever had. You said that yourself. Achara’s got it spot on. You’ve got to learn to trust her. The boy will be gone if we don’t get a move on. It’s time to let her fly.’

Baptist lifted the binoculars to his eyes for a second time,
focussing on Harry, confirming his downbeat persona and nodding
reticently. ‘Okay, go on, out you go. He’s approaching the top of the hill. Near the charity shop on the left. You’ll catch up with him easily enough if you hurry. I’ll be back here and waiting at 2.30pm sharp. Do not be late. There’s no room for errors. This is far too important for that.’

Achara broke into a smile that lit up her face as she pushed the
passenger side door open and stepped out into the sunshine, as
excited as a child on a birthday morning. ‘Thank you, thank you so
very much. I won’t let you down.’

‘Have you got the drug?’

She glanced back at him, patting a trouser pocket and grimacing,
disappointed that he felt the need to ask. ‘Of course. It’s here safe
and sound.’

Her frustration was betrayed by her tone. ‘Yes, a thousand times,
yes.’

‘Pass this one final test, and you can move up a level in the
community. It doesn’t get any better than that. Make the most of the
opportunity. The master doesn’t tolerate failure. Remember that;
carve it in tablets of stone. Screw this up, and it won’t go well for
either of us.’

I’m always happy to hear from readers and will always respond. I can be contacted by email at johnnichollauthor@gmail.com

Thank you John for being our guest this week. I am anxious to read your stories and most recently received my copy of White is the Coldest Color.
Posted by Allan Hudson at 05:42
Email ThisBlogThis!Share to TwitterShare to FacebookShare to Pinterest