2018 is almost over. The Scribbler is most fortunate to have the talented Mr. Loney as the last guest for the year to share an excerpt from his latest novel – The Last Hockey Player. Watch for the 4Q Interview coming soon. 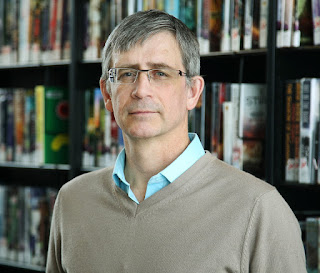 Bretton Loney is a novelist and short story writer whose work has appeared in anthologies and literary journals in British Columbia, Alberta, Saskatchewan, and Nova Scotia. In 2013 his short story, Tommy’s Mother, was shortlisted for the Writer’s Union of Canada’s Short Prose Competition for Developing Writers.

In 2015, he released Rebel With A Cause: The Doc Nikaido Story, a biography of the late Alberta physician, Dr. Harry Nikaido. Bretton lives in Halifax, Nova Scotia with his wife, Karen Shewbridge. For more information, please see www.brettonloney.com  Buying links below. 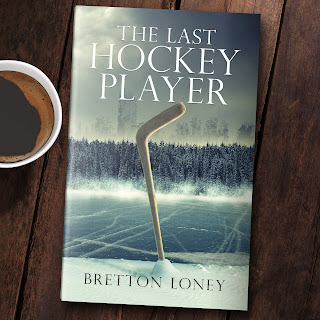 Something heavy hits the floor and jerks me awake, heart pounding. Gusts of cold wind beat the open door back and forth as snow snakes its way inside. It’s hard to see. The warming fires have died down for the night and smoke hangs around our sleeping ledges. It parts to reveal a long, thick lump of dark clothing. Someone has fallen through our door.


“Quick, grab him and throw him out into the storm,” says Old William, who sleeps on the ledge closest to the door. “He could infect us all. We can’t have a stranger inside who hasn’t passed The Protocol.”


Some of the grey ones mumble agreement. Old William knows The Protocol all too well. Last spring his two sons came back from scavenging in the city and died in The Protocol Hut of the Second Sickness. 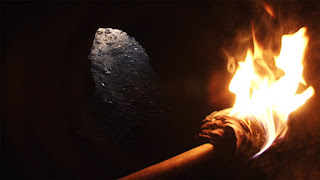 The stranger doesn’t stir. The Leader lights a torch and steps closer to the body. Puddles grow on the dirty floor as snow melts from his wrappings and the icicles hanging from his beard. He’s a big man. Bigger than Neil-Young who is the strongest and tallest of the younger ones in our village. He carries no weapon.


“What do you think, Britanny?” the Leader asks over her shoulder to the Teacher.


Britanny is wise. The Leader and other council members often seek her advice. She’s the most educated person in our village and does a lot of deep thinking. I know because as her apprentice, I spend most of the day with her. It’s been that way since my father died when a tree fell on him four summers ago.


“The Protocol is the right way,” says Britanny, as she opens the deerskin curtain that separates her sleeping ledge from the common area and props herself up on an arthritic elbow.


She pulls her fur covering more tightly around her. Britanny is always cold. She is a grey one. “But if we throw this man outside tonight in the cold, he will die. He looks strong. We all know our village needs another strong man. I say drag him out to The Protocol Hut and light a fire to keep him alive. In the morning we can decide what to do.”


The Leader weighs Britanny’s words. Many times I’ve seen her and Britanny talk quietly about what must be done. What to do with the sick. Who should join the hunting parties. Who must take the risk of scavenging. Which villages we’ll trade with in the spring and which in the fall. These decisions have given the Leader many wrinkles around her sad brown eyes that sometimes fill with tears when she and Britanny talk, their heads bowed together for privacy.


She waves her torch back and forth across the stranger, his long legs and arms sprawled on a floor littered with bone scraps the dogs have gnawed and little ones played with before bed.


“Britanny is right. We can’t throw him outside. It would be wrong to waste a man’s life. Since the last sickness, we have too few strong people to hunt, fish, and chop down trees. Old William and Coach, tie a rope around him so that you don’t have to get too close. Drag him over to The Protocol Hut and get a fire going, then bind the door shut. Sorry, but you two will have to spend the night in the barn. Take a fire bundle with you.”


There are grumblings in the darkness from some sleeping ledges as the sounds of the night’s constant hacking and coughing resumes. Some agree, some disagree, but the Leader has spoken and so it is done. She chooses Old William because he’s a grey one and can be lost if the stranger has sickness. She chooses Coach as Old William can’t drag the stranger through the snowbanks to The Protocol Hut by himself. They put a rope under each of the stranger’s arms and pull fiercely. He must be heavy as a tree trunk.


“Christ, why do I have to help?” Coach says, not so loud that the Leader hears, but loud enough that others do.


Another grey one sighs, breaks away from the arms of his wife, and comes to help. They drag the stranger from our warm nest into the blizzard and slam the door. Outside the wind thrashes angrily, pushing and pulling, desperate to find a way inside.

We still know very little about the stranger who was thrust into our midst. He spent two days in The Protocol Hut and somehow survived. The hut is not well-made or warm because if anyone who stays inside is actually sick, we have to burn it to the ground and build another one. We warned everyone to stay three arms-lengths away as The Protocol says. My apprentice pushed a bowl of rabbit stew to him with a long stick. It was not much, as it is early winter and our food stores are already wearing thin as they did last winter. The hunting parties have caught some small game and birds, the fishers some trout and pickerel through the pond ice, but not enough. Hunger growls in every stomach.


The Leader and I come out in the failing afternoon light and tell the stranger to strip off all his clothes, even though it is very cold. We tell him to raise his arms so that we can see if there are boils under his armpits or rashes from the Black Sickness. He has strong shoulders and well-muscled arms. His chest and stomach are covered with thick brown hair. There is a large, jagged scar near his ribs.


The stranger has powerful thighs and a knee that is crisscrossed with thin, pink surgical scars. The Leader tells him to move his massive thing one way and another to make sure no open sores or lumps hide behind it. We cannot help grinning at each other as he does this.


“Oh, to be young,” I whisper to the Leader, who has a greedy glow in her eyes.


“You have passed The Protocol, stranger,” says the Leader. “Now the three of us will go over to the Lookout’s Platform for some privacy to talk about where you’ve come from and where you’re going. We need to know of life beyond our village and the neighbouring villages.”


The stranger tells us he is originally from another Nova Scotia village that is a week’s journey from here. It is probably abandoned now, but no one knows for certain. He was working in Hershey, Pennsylvania, and got stuck there when The Crumbling came, eighteen years ago. He says that he and other foreigners were about to be deported by the U.S. Government when the second wave of the Bogota Virus washed over the world. It killed hundreds of millions in North America and around the world, destroying governments and institutions and decimating the medical community. Worse was to come.


He says that when he eventually decided to leave, it took him more than a year to walk to our village. It is insane to walk all that way alone. He is lucky to be alive.


The stranger has seen many things and people during his travels. Some were cannibals and he stayed well away, the piles of human bones scattered around the edge of their villages a warning sign of imminent danger. One night in upstate New York, he walked past a village in a forest that was all lit up, guarded by huge, barking dogs. The stranger says he was sure it had electricity. I burst out laughing at that one. I am certain that no one has had electricity anywhere since The Crumbling.


Some of the villages the stranger passed through were organized like ours, with a few families living and sleeping together in one large shelter and sharing the food caught in the water, hunted and gathered in the forest, and the little that can be grown and traded. In others, individual families live in their own huts and only eat what the hunters and fishers in their family catch. How they manage to survive without sharing, I have no idea.


I tell my apprentice about all this afterward, as it is important for a bright boy like him to know as much as possible about the world outside our village. Because of his clubfoot, he has never travelled more than the half-day’s journey to the village of TimHortons that we trade with regularly. Even that trip makes his foot sore for days afterward, not that he says anything, but I can tell.


“I think some of what the stranger told us is B.S.,” I whisper to my apprentice as we get ready for bed. “Either that or he is crazy as a loon, and I don’t think he is crazy. His eyes are too wary to be crazy.”


I blow out the candle above our sleeping ledge and ponder the meaning of this stranger’s arrival. He has stirred my memory. You almost forget that once there were streetlights, waterproof coats and hot baths instead of the swallowing darkness of a winter forest, greased animal skin cloaks to cut the biting cold and, if you’re lucky, a pail of cold water to wash your face. It is depressing to remember what once was, and dangerous too. To stay strong it is best to try and forget the old life.


The warming fires cast eerie shadows on the ceiling of our shelter as I try to fall asleep.

Thank you for being our guest this week Bretton and sharing the first chapters of your captivating story. We look forward to your 4Q Interview.

The Last Hockey Player can be purchased here: