This week on the Scribbler you will meet Rob Rayner. A multi-talented gentleman from St. George, NB. 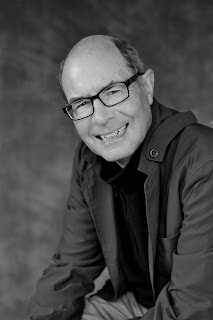 I never knew what I wanted to be when I grew up.

In addition to a few go-nowhere jobs, I’ve been a journalist (in Cambridge, England), a teacher (in Colchester, England; Glovertown, Newfoundland; and Charlotte County, New Brunswick), and an elementary school principal (in St. George, New Brunswick).

I’ve been writing as long as I can remember, news and features as a journalist, tracts and diatribes on education as a teacher, stories to read to students as a principal, and, all the time, stories for their own sake. Rather to my surprise, I’ve now written one crossover novel, nine YA novels, fourteen novels, and three adult novels.

Although I forsook being a school principal to teach music at home, and to have more time for writing, I still love the world of school, and often talk to students about writing. Many of my stories have grown out of, and continue to grow out of, my experiences working with children of all ages.

When I’m working on a book, I usually write in the morning, starting early, and play and teach music in the afternoon. If I’m under pressure to finish something, or I’m obsessed with a story (which I regard as a good sign), I tend to write at every spare moment, and when I’m not writing, I’m thinking about what I’m going to write.

When not writing, or playing and teaching music, you’ll find me (just suppose you want to) walking, reading, skiing, taking photographs, feeding and watching the birds, or listening to music. I play keyboard, and a bit of sax and clarinet, with Stepping Out, a band that performs standards, country rock, blues, and old rock and roll, and I use the guitar to accompany songs I’ve written to introduce some of the characters in the stories. 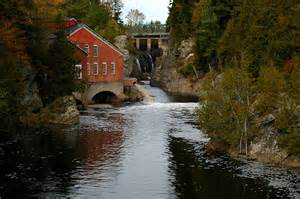 I live in St. George, New Brunswick, on the Magaguadavic River, where I drive Nancy, my wife, to distraction by getting obsessed with writing, and by watching lots of soccer on TV (go Newcastle United and Wolverhampton Wanderers), and by playing loud music.


The sun is just up and the air is cool. Wenden reckons it’s late October, which means they’ve been there nearly a year. He wonders if that’s cause for celebration or lament.

Ridge comes around the side of the house and stands beside him.

Ridge goes inside. He peers in his room. Isolde is grey. Like Wenden, like all of them, like everything. He’s almost forgotten color, since he’s been trapped on this side. Sounds are muffled, in harmony with the grey pall, except the sounds of danger, or of anything at which he directs his essential ruthlessness. It’s what he’d learned to summon – what he’d needed – in the months before they found sanctuary with Speed. Now he curses his transcendence, at the same time as he knows that one day he’ll need it again.

Isolde sits up in bed, a grey wraith, sniffling, wiping her nose with one hand, one shoulder bare as the baggy tee shirt she wears to sleep – one of his – slips down. She reaches her arms towards him. She rises from the bed like smoke. Her hands slither over him. Her voice comes from a distance.

“I’ve told you over and over. Like nothing. Just a … a resistance.”

She tries to smile. “I’ve never resisted you. Not for as long as I can remember.”

“Don’t you feel anything in Colorland? I don’t mean just touch, but feelings?”

He tries to summon feelings.

His coat round her shoulders, her hand in his, the day old trace of her scent on a borrowed shirt flit through his memory and are lost.

“You ask me that every day.”

Outside on the veranda, Wenden rises from his seat on the steps to greet Speed.

She says, “Everything okay?”

Thank you Rob for joining us on the Scribbler and this teaser to your thriller, Colorland. 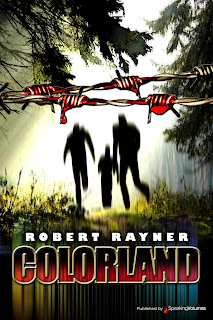 Please visit again next week when Mark Tilbury of Cumbria, England shares an excerpt from his thriller - The Revelation Room. 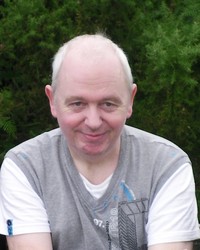 Posted by Allan Hudson at 07:01
Email ThisBlogThis!Share to TwitterShare to FacebookShare to Pinterest