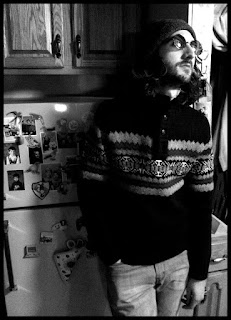 The Scribbler is very pleased to feature local musician Andrew Moore on the 4Q Interview this week. A multi-instrumentalist from Moncton, NB, his music is described as a heavy hitting rock/blues, tonally experimental sound.  I’ve had the pleasure of listening to Andrew preform and I like the jazzy edge he adds to his music.  This is an artist to watch. His links are listed below.

4Q: Thank you Andrew for being our guest. Please share with us your musical journey. When did you realize how important music was to you and that you wanted to be a performer?


AM: Thank you for having me!  I think that it goes back to a show I played when I was 19.  Music had always been deep in my bones and even as a child I was always tinkering with it in my head but I really think it was that show that solidified it for me.  There were a couple hundred people that had shown up to jump around to a rock show and I remember their energy like it was a tangible substance.  There’s a feeling you get from playing music in front of people and let me tell you, it’s literally a drug.  This was the first time I had that feeling and I’ve been addicted to it ever since. 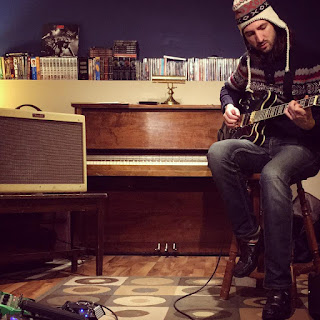 4Q: I walk into the local music store and I see a CD by Andrew Moore. I buy it and take it home. If I’ve never heard of you, what could I expect when I put it in the player?


AM: Make sure someone didn’t put something funny in your drink because I have no CDs for sale at the moment.  But, say I had a CD in the local music store? At this point, I’m not sure.  The album I’m currently making has taken a couple different turns as I keep adding to it.  My best guess is that you’d hear a mix of Pink Floyd, Supertramp, Jack White and The Roots.


AM: A childhood anecdote! Well, as a kid I spent a lot of time in my own head.  My mother has always said that I never needed anything to be entertained.  I could amuse myself for hours, without toys.  So as a kid I used to play around with melodies and sounds in my head but sometimes it would transfer over into audible noises and sometimes words.  One day when I was about 10 years old, I was lying on the living room floor, in my own head once again playing around with my imagination and somehow ended up under the rocking chair, experimenting with melodies and phrases.  Things became audible and sure enough as fate would have it, my brother came into the room, utterly confused. 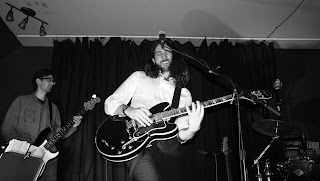 4Q: What does the future hold for Andrew Moore the musician? Where are you playing and what are your recording plans?


AM:  I’m really excited for 2016.  I’ve been working on a record for the past two years and it’s on the brink of completion so I’ll be aiming to have it released by February.  As for shows, I have nothing currently booked.  I really want to get the record finished before I play again.  In saying that, I play at Plan B every few months so you can see me there in February or March.  I’ll also be looking to hit the festival scene this summer.
<iframe width="560" height="315" src="https://www.youtube.com/embed/tLqBPv622v8" frameborder="0" allowfullscreen></iframe>


Since the interview was completed, Andrew has a show booked at Plan B for March 12th.

Thank you Andrew for being our guest this week. I look forward to hearing more of your tunes and wish you all the best for your future endeavors.


You can discover more about this talented artist by visiting his website at www.andrewrdmoore.com
Next week on the Scribbler author Sarah Butland will be back with the continuation of her short story Blood Day. The first part was featured on the Scribbler last year. Glad to have her return.

Posted by Allan Hudson at 09:42
Email ThisBlogThis!Share to TwitterShare to FacebookShare to Pinterest