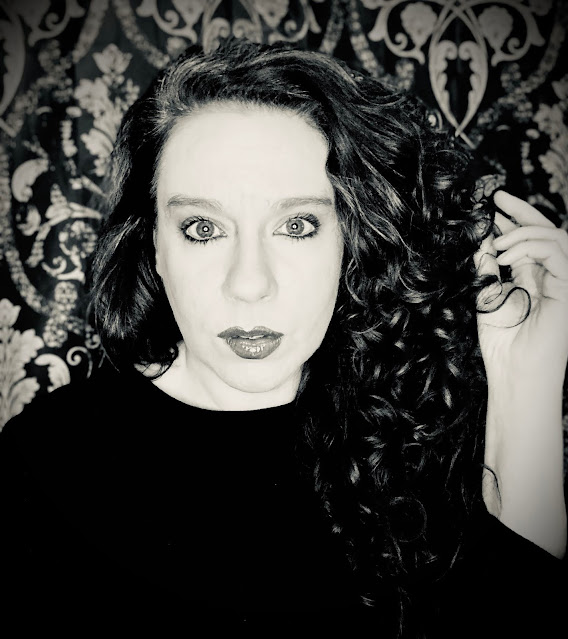 Follow her guest post to discover her bio, her links and all good things about her writing.

I get sentimental during the autumn, not sure if it’s remnants of hopeful back to school wishes—the hope that this year will be different than the last one. Or perhaps it is seasonal depression creeping its way in with the shortened days and the cold frost covered mornings.

I love Halloween. I have as long as I can remember. I remember seeing myself dressed in one of those close-to-toxic plastic Halloween costumes that made the inside of my nose itch and burn with each stifling breath. I think I was supposed to be Aurora, but the photos from this time give off more of a bad seed or serial killer vibe. I remember my skin getting wet and clammy under that mask, smelling my own candy-coated breath as I snuck Sweet Tarts and Tootsie Rolls from my Halloween bag—my fingers would make the outside of my mask sticky with sweet grime.

I remember graduating from plastic costumes into real costumes. Made up of hand me down clothes and a red yarn wig for a Raggedy Anne costume. I remember the disappointment on my father’s face when he realized I wouldn’t be dressing as Raggedy Andy. I never could be the tomboy he wished me to. Not even for Halloween.

As some kind of halfhearted attempt to make him happy, I carried the Raggedy Andy doll he had given me for my birthday. My raggedy imaginary twin brother. 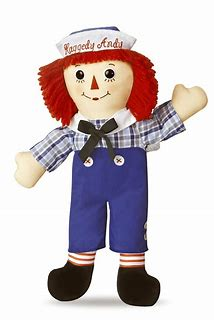 My sticky candy hands dropped that doll in a puddle filled with moldering fall leaves and by the time I got home it smelled terrible. I decided to play with the doll from now on outside. Raggedy Andy could live on our porch or in the garage as if he were a feral cat.

On a day not long after Halloween, Sandy, the neighbor’s boisterous golden retriever bounded into our yard and snatched it out of the makeshift swing I had tied to pine tree branch.

Part of me was relieved, that I wouldn’t have to play with this moldy boy doll.

My father looked at me with disappointment again when I told him of the great Raggedy Andy doll-napping of the neighborhood. I was always prone to crying, and there were no tears when I told him about what happened. Just wide eyes that silently begged for a new doll, this one Raggedy Anne.

I think of that doll now, now that it is fall and sometimes, I swear I can almost smell it’s muddy damp body. I miss it.

I miss everything this time of year.

Now when I think of that doll I cry.

My grandmother on my father’s side, Grandma Ruth, looked like Bilbo Baggins. I never saw a photo of her that my mother didn’t take, so she was always Bilbo in my eyes. Never her saw her in her youth, could not even imagine what she would have been like, had she ever been young? It seemed impossible. She was not quite five feet tall and had wiry gray hair, short and curly, and she wore plastic bonnets when it rained. I never understood how my tall lanky father was a part of her. She wore knee high nylon socks and sensible shoes and a navy-blue smock dress that made her look like someone’s maid.

I never saw her in anything but this, even though she spent every Saturday afternoon and night at our house for years.

I have no memory of my father sitting and talking with his mother, though he must have. Their family was always quiet and strange with each other. A family of strangers and shadows. My father was the oldest of ten children. Of his nine brother’s and sisters I believe I had only in my life met three of them. Though others would eventually show up for his funeral. They all blended into one blur, one whisper in my ear from my mother. “The Gordon’s are here.”

One of the Gordon’s, Pete, went missing in his late teens, a runaway perhaps, or perhaps not. He was never mentioned, never looked for in any kind of meaningful way.  Once I asked my father about it, he said “Well there were ten of us, one going missing is still good odds.”

I wondered if my father and his mother would talk about him in some strange silent way that only Gordon’s could understand, but I somehow couldn’t.

I was always allowed to go with my father on the rides back to my grandmother’s small apartment above a hardware store, four towns away. The same town my father grew up in. 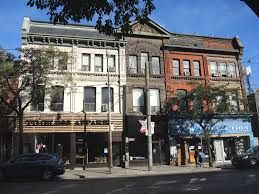 On the way there we would stop at the liquor store. My father would push the cart and my grandmother would just point at what she wanted. My father would take the large glass jugs and fill the bottom of the cart. I didn’t know how someone so small could consume that much liquid.

Gin, whiskey, scotch, and tequila. I didn’t understand what it meant at the time, but my mother told me that “Ruth drinks the tequila with the worm still in it, she even drinks the worm.”

My father would bring the boxes of alcohol up the steep stairs to her apartment. It would take two trips, and this happened every Sunday afternoon when we would bring her home.

Her apartment was filled with paintings she had done. Her daily habit was to watch Bob Ross and follow along with him as long as she could until she could finish on her own.

Her mantle had framed photos of horses and a large house that I had never seen and never even been driven by. 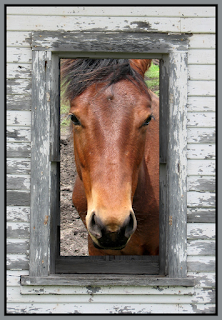 The Gordon farm. It looked haunted even though there were nameless lanky children scattered in front. None of them looked at the camera. I wondered which one was Pete. But I never asked. I didn’t know how to ask silently, to talk silently like the Gordon’s could.

I don’t know what happened to the family that lived there, the family that was mine except they were not. A family of strangers that I miss, that I think about during autumn, before and after Halloween.

I think of them as ghosts, rattling around inside my head. When I think of them, I smell that old wet doll, I smell my candy breath, and taste the cherries from the bottoms of my mother and grandmother’s sticky Tom Collins glasses, and I wonder if it’s possible to miss a family you never really knew. 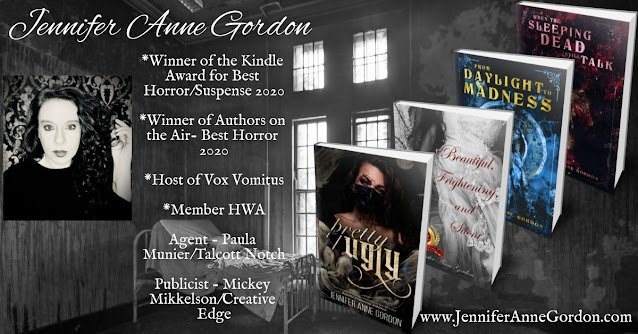 Jennifer Anne Gordon is a gothic horror/literary fiction novelist. Her work includes Beautiful, Frightening and Silent which won the Kindle Award for Best Horror/Suspense for 2020, Won Best Horror 2020 from Authors on the Air, was a Finalist for American Book Fest’s Best Book Award- Horror, 2020. It also received the Platinum 5 Star Review from Reader’s Choice as well as the Gold Seal from Book View. 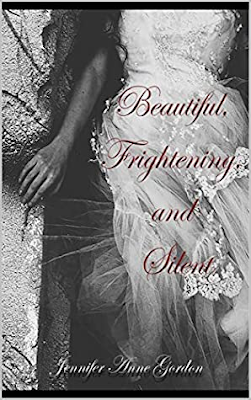 Her novel, From Daylight to Madness (The Hotel book 1) received the Gold Seal from Book View, as well as The Platinum Seal from Reader’s Favorite, and When the Sleeping Dead Still Talk (The Hotel book 2) was released to critical acclaim and was recently announced as a semi-finalist for Best Horror/Suspense for the Kindle Awards for 2021. 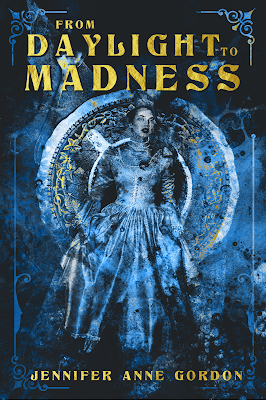 Her latest novel Pretty/Ugly received the platinum Seal from Readers Favorite, as well as the Gold Medal from Literary Titan. The novel has been called “An exquisitely written horror tale” by Wendy Webb (NYT Bestselling author of The Haunting of Brynn Wilder) 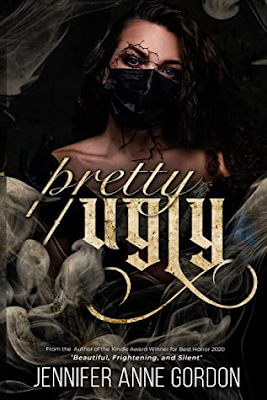 Jennifer also had a collection of her artwork published Victoriana: The Mixed Media Art of Jennifer Gordon.

Jennifer is one of the hosts as well as the creator of Vox Vomitus, the top-rated video podcast on the Global Authors on the Air Network, as well as the host of “Let’s Scare Jennifer to Death”
As a podcast host Jennifer has interviewed authors such as V.C Andrews, James Rollins, Paul Tremblay, Sarah Langan, Mary Burton, Josh Malerman, Joe Lansdale, Shawn Cosby, Carol Goodman, Paula Munier, Wendy Webb, and Matt Ruff. She had been a contributor to Ladies of Horror Fiction, Horror Tree, Writers After Dark, Reader’s Entertainment Magazine, Nerd Daily, and Ginger Nuts of Horror. She is also a featured writer for Top Shelf Magazine, and Uncaged Magazine.

She graduated from the New Hampshire Institute of Art, where she studied Acting. She also studied at the University of New Hampshire with a concentration in Art History and English.

She has made her living as an actress, a magician's assistant, a "gallerina", a comic book dealer, a painter, and burlesque performer and for the past 10 years as an award-winning professional ballroom dancer, performer, instructor, and choreographer. 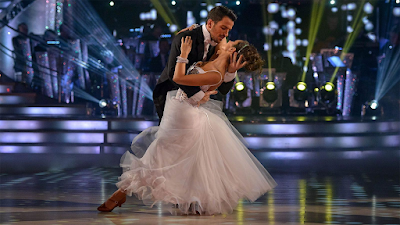 When not scribbling away (ok, typing frantically) she enjoys traveling with her husband and dance partner, teaching her dog ridiculous tricks (like 'give me a kiss' and 'what hand is the treat in?' ok these are not great tricks.) as well as taking photos of abandoned buildings and haunted locations.

She is a Leo, so at the end of the day she just thinks about her hair.
For more information and benevolent stalking, please visit her website at http://www.JenniferAnneGordon.com